Mutation mechanisms can be categorized into Micro or Macro Mutation processes. The Micro mutations cause single nucleotide changes in the DNA code whereas the Macro Mutations cause larger DNA sequence changes. Micromutations are caused by errors in DNA replication, Ionizing radiation, DNA mismatch repair, Nucleotide Modification enzymes (ie. deaminases and methylases), and direct chemical modification of DNA base pairs.

Macro-Mutations are mediated by Protein Based Enzymes such as : integrases - transposases, transcriptases-polymerases, and endonucleases-ligases. It is theorized that these enzymes have undergone Zinc and other Element based genetic code changing periods in the past. Major episodic evolutionary events have occured from horizontal gene transfers involving integrases and transposons.

The superfamilies of DNA transposons are clues to the Major Cosmic Viral Particle Originations of Life.

One of the Extra to Intra Tranfer Agents is exemplified by Bacteriophage-Like Structures that can theoretically be able to use their fibers to harness light and magnetic energies in interstellar space. These structures carry packets of genes that assemble into plasmids via the Super Integron System and subsequently into Nucleo-Cytoplasmic Large DNA Viruses (NCLDs), and the Chromosomes that Make us Human Beings. The two currently known structures of the Bacteriophage Particles are exemplified by the Filamentous/Non Lytic Phages and the Icosahedral/Lytic Phages shown below. 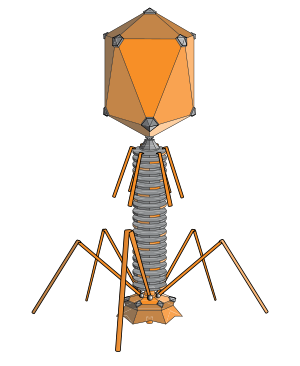 Bacteriophages, NCLDVs, Circular ssDNA Viruses, Retroviruses, and Filoviruses are major horizontal gene vectors responsible for the genetic evolution of Prokaryotes and Eukaryotes, (including Mammals, Primates, and Humans). Darwin's theory of pangenesis can be interpreted as equivalent to horizontal genetic vectors representing gemmules and epigenetic histone + DNA modifications as well as viRNAs providing methods of Lamarkian inheritance.